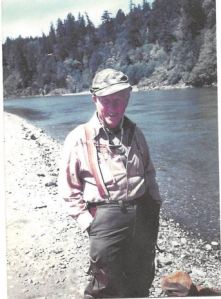 Duane Raymond Walker, M. D., was born and raised in Clark Missouri, a tiny town near Moberly.  He had polio as an infant and spent long periods in an iron lung to strengthen his young body from the disease.  The disease left him with a withered leg and a permanent limp. Despite his pronounced limp he played tennis in high school and college and was an avid hunter and fisherman.  He never let his condition slow him down nor did I ever hear him complain of it. I’m sure the experience of his illness and the kindness and generosity of the Shriner’s and treatment received at their hospital’s inspired him to become a doctor.  He founded McHenry Medical Group with Howard Nachman, M.D. and was also a founder of Doctors Medical Center. My father loved fishing the most and so this Father’s Day I celebrate him with a picture of doing what he loved best, fishing along the Sacramento River.